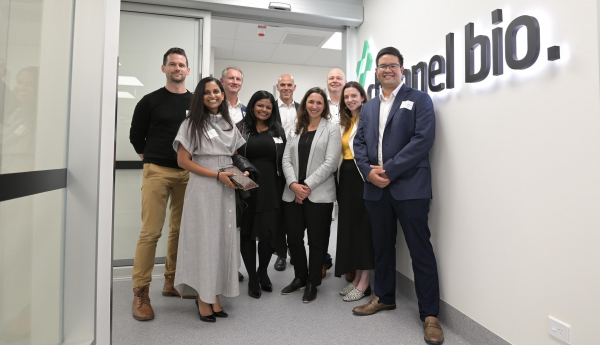 Channel Bio recently launched its new state-of-the-art facility at The Grounds of Alexandria in Sydney.

The large three-storey space will host over 100 scientists working to solve some of the toughest challenges in drug discovery.

To celebrate the opening, the Channel Bio team led by Adam Clarke and Jonathan Nambiar hosted members and supporters of the NSW biotechnology and research community.

They also welcomed the executive team from AbCellera, which is Channel Bio’s parent company, including CEO Carl Hansen.

AbCellera is a global technology company headquartered in Canada that finds antibodies that can be developed into drugs to treat and prevent disease. The company contributed to fighting the COVID-19 pandemic, co-developing two antibody treatments against SARS-CoV-2 with its partner Lilly.

Beyond its pandemic response, AbCellera is using its drug discovery technology in over 150 drug discovery programs across indications such as cancer, pain, animal health, and brain diseases.

Channel Bio was launched in 2019 to develop technology to unlock antibody discovery against some of the most difficult drug targets, including for G-protein coupled receptors (GPCRs) and ion channels.

“Channel Bio is working on technology to access difficult-to-drug target classes to redefine what is possible in the industry,” said AbCellera CEO Carl Hansen.

“Channel Bio’s team and technology are world-class, and we look forward to sharing exciting developments about its work in the near future.”

“We’ve just started and, with our growth plans, are excited to build up the biotechnology industry here in Australia,” said Adam Clarke, senior vice president of Channel Bio.

“We chose Sydney as our headquarters because of its vibrant scientific community and access to local talent. We look forward to scaling our team and technology to unlock these important, but difficult drug targets, to treat human disease.”