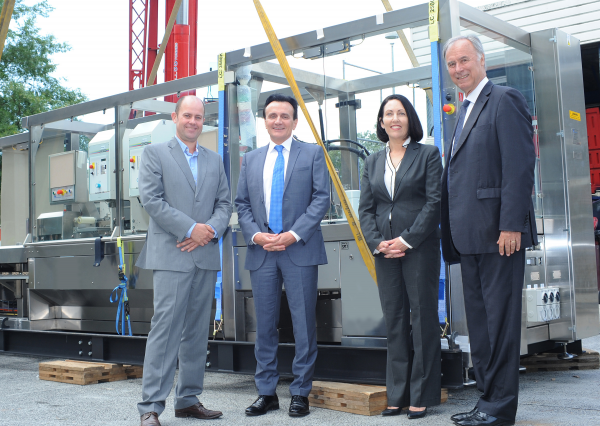 The anniversary event coincided with installation of one of the new production lines announced earlier this year as part of a $100 million expansion of the site that will generate $2.4 billion in exports over the next four years.

The lines are designed and build by Melbourne-based Andrew Donald Design Engineering.

“Our achievements wouldn’t be possible without the help of many research organisations, patient bodies, suppliers and our staff who make up the heart of our organisation," said Ms Chatwin.

“We have always been committed to improving the lives of Australians and being actively involved within the local community. That is why we reaffirm our commitment after 60 years in Australia to make medicines that make a difference, to act with honesty and integrity and to supporting the community.”

“Congratulations to AstraZeneca on 60 years of providing for our local community," said Mr Alexander. "It is particularly pleasing to see their ongoing investment in our local area through the additional $100 million investment into their biopharmaceutical manufacturing operation.

"Bennelong is the innovation capital of Australia thanks to cutting edge local companies like AstraZeneca. I congratulate them for bringing this investment and these new jobs into our region and thank them for their continued support for our community.”

According to Mr Soriot, a regular visitor to Australia, “Australia is an important country for AstraZeneca globally, and I am delighted to be here today to mark 60 years of making a difference to Australian patients, as well as the local community.

“North Ryde has been home to our manufacturing facility for the past 35 years and continues to demonstrate that it has the expertise to deliver competitive, highly technical and innovative production. This is a triumph for not only Australian manufacturing but also for local employment, economic growth and investment.”